Why the Gunners need to move quickly to sign this £45m talent Edinson Cavani?

For one reason or another, The Gunners continue to pick up links to Paris Saint Germain’s star striker,Edinson Cavani.

The Uruguayan has always been in Zlatan Ibrahimovic’s shadow in Ligue 1, but it’s still difficult to see him moving across the channel to join up with Arsenal.

Following all, despite having spent big on players like Alexis Sanchez and Mesut Ozil, it’s still hard to picture Arsenal spending big on players. Edinson Cavani is the kind of player that never seems to get linked to Arsenal. His price-tag is just too large. 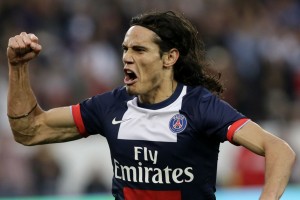 Since, the player’s reputation in Paris has taken a hit. It’s not that he’s stopped scoring goals, it’s more that he has run into a few disciplinary issues.

He was suspended for three matches for missing PSG’s mid-season training camp. Cavani’s coach, Laurent Blanc had this to say:

“Nothing is forgotten. They [Cavani and Lavezzi] are two important players, we did what we had to do. They must accept their stupidity.”said Blanc.“There will certainly be exits out of PSG in the winter market.” He added.

If Arsenal actually are interested in signing Edinson Cavani, now looks like the right time for them to make their move. The Report claim that Cavani would cost the Gunners as much as £45m.