Arsenal are reportedly planning a shock summer transfer for Tottenham goalkeeper Hugo Lloris. According to French newspaper, Arsene Wenger is keen to sign a goalkeeper and has already tried to sign the French stopper in the past and he might reignite his interest again during the summer transfer window.

The reports earlier in the month reports suggested that the Gunners are on the lookout for a new keeper after current number one Wojciech Szczesny lost his place to David Ospina amid some poor on-field performances combined with off-field antics.

After that the French 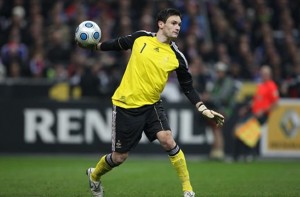 manager is reportedly not convinced with the Polish international and is looking to bring in an experienced stopper to replace him.

The Tottenham shot stoper has been in exceptional form for Tottenham and has impressed with some top quality performances in the last two seasons.

The captain of France International team has been linked with a move away from the club, with the report claiming current European champions Real Madrid and Ligue 1 champions Paris Saint-Germain as possible destinations.

Furthermore, Lloris has indicated in the past that he wants to play in the Champions League and if Spurs fail to qualify for the competition this season, the goalkeeper might look for a club that will offer him European football.