According to reports, Arsenal are eyeing a £12m bid for Italian international goalkeeper Mattia Perin.

Arsene Wenger is believed to be on the look-out for a new number one after finally losing patience with Wojciech Szczesny. The Polish has been dropped for his inconsistent form and was also disciplined for having a smoke in the changing rooms after our loss at Southampton, a game in which Szczesny made two errors.

Although, the likes of Petr Cech and Hugo Lloris has also been linked with a move to the Emirates in recent weeks but the latest name supposedly on Arsene’s radar is Genoa’s Mattia Perin.

The 22-year-old is now the bosses main target and club chiefs are plotting a £12m bid which could go in as early as this month. Perin has been impressing for Genoa and has been dubbed in Italy as the ‘next Gigi Buffon’, with the youngster already playing for the national side. 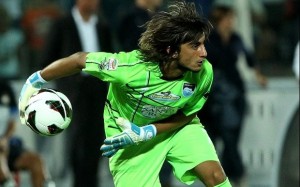 However, there have some doubts over whether Arsene is actually in the market for a new goalkeeper just yet, as he’s shown a huge amount of faith in Szczesny in the past, while we’ve not been able to even give David Ospina a chance since his arrival in the summer due to a long-term thigh injury.

It looks that the gaffer will use the second half of the season to see if Ospina can push Szczesny to a new level before considering his goalkeeping options in the summer, at which point they may move for Perin if Arsene feels a new No.1 is needed.