The Gunners ready to anger Liverpool by moving back Luis Suarez

Arsenal are ready to rekindle their interest in former Liverpool hero Luis Suarez, according to reports.

Arsene Wenger’ side, who made an infamous £40 million plus £1 bid for the striker back in 2013, are now ready to test Barcelona’s resolve to keep the Uruguayan, according to reports today.

The Uruguayan  has struggl 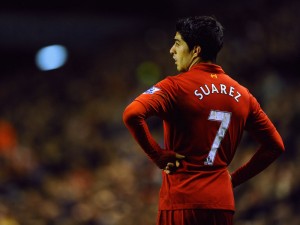 ed to regain his electric Reds form following his £75 million summer move, and has scored just five goals in 16 appearances for Barcelona since returning from his biting ban in late October.

As Andoni Zubizarreta, the man who brought Suarez to Spain, has since been sacked, and the 28-year-old has also fallen out of favour with manager Luis Enrique, who axed the former Anfield ace for the recent 6-0 rout of Elche, where Lionel Messi, Neymar and Pedro were all on target.

However, Arsenal gaffer remains keen on the hitman, and would jump at the chance of teaming Suarez up with fellow South American Alexis Sanchez at the Emirates should he become available at a cut price.

Suarez was one of the key players for the Reds during last season success as he ended Premier league with leading goal scorer. The Barcelona striker move also affects Liverpool performance this season.