The Eagles gave a debut to on-loan Arsenal forward Yaya Sanogo this weekend. 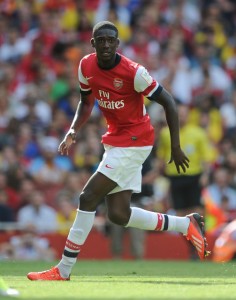 Sonogo has plenty of competition for a starting place at the Emirates, with the likes of Olivier Giroud, Danny Welbeck and Alexis Sanchez all ahead of him in the pecking order, so it was not a surprise to see him head out on loan in 2015.

The 21 years-old has made 20 appearances for Arsenal till now but he has only managed one goal in that time, so more top-flight experience cannot be a bad thing at a club where he is likely to play far more regularly.

But how did he do in Palace’s 3-2 win against Burnley on Saturday? His passing accuracy needs plenty of work, with just 56 per cent of his attempts finding a teammate on this occasion.  He also had just one shot (off-target) and failed to provided any assists, although he did make one key pass.

The Frenchman’s age means he still has plenty of time to make it at Arsenal, but for now it is all about Palace as the youngster seeks to help Alan Pardew’s men climb further up the table.