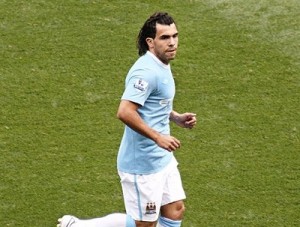 The Argentine was suspended by the club on Wednesday after he refused to some on as a substitute in Tuesday’s Champions League loss to Bayern Munich.

It’s common knowledge that the 27 year-old is unhappy at the Etihad Stadium and he has voiced his desire to leave the club on more than one occasion.

In a post-match interview at the Allianz Arena, Mancini stated that the forward’s career with the Citizens was ‘finished’, and Redknapp is convinced that this discontent will affect the squad as a whole.

The Spurs manager noted: “If you’re Manchester United or Chelsea and you’re thinking about winning the league, you feel more confident today because you look at that and it’s damaged Manchester City football club.”

The moment of madness could have come at a better time too, with City currently witnessing a disappointing run of form, drawing against Napoli and Fulham, not to mention Tuesday’s loss in Germany.

Redknapp added: “It was unbelievable. I felt sorry for Roberto Mancini to be put in that situation. It’s not fair. It wasn’t right for Man City, wasn’t right for football. It shouldn’t believe it. It can’t happen.”