Former Liverpool gaffer, Gerard Houllier believes Steven Gerrard will return to Liverpool in a coaching capacity once his playing days come to an end.

Today, the Liverpool captain announced his intention to leave Anfield and move abroad at the end of the current season when his contract runs out, with a move to the MLS widely anticipated.

AsHis decision brings a long-association with the club to an end, but Houllier does not think he will be away from Liverpool for long.

“Stevie has done the right thing in having have a break from Liverpool. He can do his qualifications and [then] I wouldn’t be surprised if one day we saw him become the boss at Anfield” said the former boss. 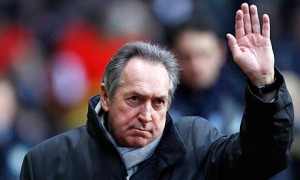 He said that the former England captain has always put the team first, so he will becomes a very successful manager too.

The Frenchman went on to sing the praises of Gerrard, paying special attention to the midfielder’s professionalism from an early age.

“I knew he wanted a new challenge, and he is at an age where has to look at his future. He wanted to do something different, but he didn’t want to stay in the Premier League” he added.