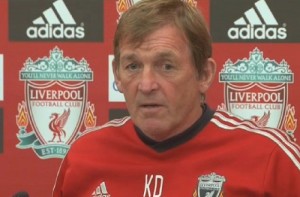 2-0 was the final score at the Hawthorns as Liverpool extended their unbeaten run to 7 in all competitions. Charlie Adam and Andy Carroll were on the score sheet as the Reds came through a routine win against a lackluster West Brom side. The win gives Liverpool a total of 18 points from 10 games, and although this counts as good start to the season, it could easily have been so much more than that.

In their performances, it is encouraging to see the return of the quick paced, flowing football that almost guaranteed Liverpool a top 4 finish in the past, however the performances have often failed to deliver the final result with Liverpool dropping points against both Manchester United and Norwich at home, when having outplayed and lead the opposition for the majority of the game.

This is not unfamiliar to Liverpool fans, with their downfall in reaching the top four in recent years down to their amazing ability to draw against lower ranked opposition than themselves.

The recent draws can, in part, be put down to the failure to convert goal scoring opportunities, with Liverpool hitting the woodwork 10 times this season so far, an average of once every game. Couple this with Liverpool’s impressive shot and possession stats, it is plain to see there has been an improvement in the attacking aspects of the team, but this does not necessarily lead to goals.

Strikers being selfish when they shouldn’t, and fellow attackers hitting the bar, the goalkeeper or missing completely means that Liverpool’s conversion rate, from goal scoring chances into goals, is not as good as others. As a result they have fallen behind the likes of Manchester City, United and other teams that are pushing for a top 4 places, something which they can not afford this early in the season.

But the failure to close out wins consistently is not just down to attacking side, but also the defending side of the game. Pepe Renia, Jamie Carragher and Martin Skrtel have been some of the stand out names at Anfield in recent years, however this season they do not seem to be playing together with the same pace and concentration that they had in the past. In fact a lack of concentration and communication resulted in a goal by Holt in the 1-1 draw against Norwich, where he powered a head past Reina, after the goalkeeper had jumped into his central defenders when attempting to punch the ball. By no means has Liverpool’s defending become disastrous, but it is no where near the same standard as solid and compact looking Manchester City.

Liverpool have started the season relatively well, and with the way they are playing and attacking the opposition there is certainly far more hope from the Kop than in previous seasons. However one thing is for sure, Liverpool cannot afford to keep drawing against teams, especially if they are below the top 6 in the league. The longer Liverpool remain inconsistent, the longer the road becomes back to the top 4.