Both Inter and Napoli have struggled so far this campaign ahead of their meeting with each other on Sunday.

Inter have lost their last two league matches, conceding seven goals in the process, whilst Napoli have started to turn their campaign around.

Both Walter Mazzarri and Rafael Bentiez face their former employers, after Mazzari left Napoli for Inter in 2013, with Benitez dismissed by the Milan club.

Fiorentina recorded an easy 3-0 win at home to Inter prior to the international break, with Khouma Babacar opening the scoring with a stunning goal.

The former Manchester United target Juan Cuadrado made it 2-0, before Nenad Tomovic sealed the win in the second period. 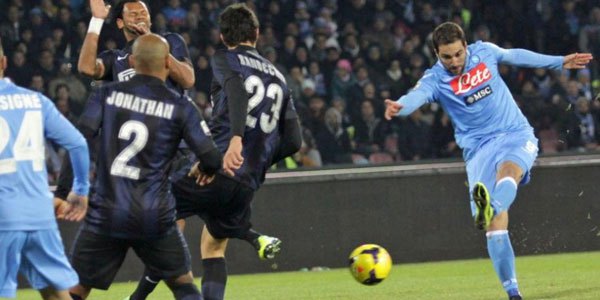 Napoli made it back to back wins in their last Serie A match, coming from a goal down to beat Torino 2-1.

Fabio Quagliarella gave the visitors a deserved first half lead, however Benitez’s side recovered late on.

Last season’s match at the Giuseppe Meazza finished goalless, however in front of Napoli’s supporters it certainly was a better match.

Gonzalo Higuain opened the scoring as Napoli beat the 10 men of Inter 4-2, with Callejon sealing the win late on.

Team news
Nemanja Vidic will start in the heart of Inter’s defence, despite an inconsistent start to life in Italy.

The former Cardiff midfielder Gary Medel is likely to start, along with Yann M’Vila, with Mauro Icardi pushed further forward.

Higuain is yet to score this season for Napoli, however will once again lead the line in a bold 4-2-3-1 formation.

The Swansea loanee Michu will start, with Callejon and Insigne close to lone forward.