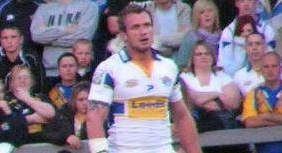 Forward Jamie Peacock believes that both sides Leeds and St Helens are worthy of their places in the weekends Rugby League Grand Final.

The England captain feels that his Leeds side have put in enough good performances to warrant a place in the final including an impressive win against the inform Wigan. Whilst Leeds did not finish as well as hoped in the Super League he believes that performances over the last month warrant a place at Old Trafford this weekend.

“Saints have put in two stellar performances to beat Wigan and we’ve had to play some good opposition as well, we might not have finished highest in the table but we’re definitely there on merit, on our performances over the last four or five weeks.”

The former Bradford Bulls forward believes that history will place no part this weekend as he seeks to emulate what he achieved at Bradford Bulls after winning three Grand Finals before moving to Leeds in 2006.

“The past will have no bearing this weekend, we’ve got good associations and happy memories of this place but it seems like different eras. There are two different coaches and a few different players as well.”