Jordan Henderson’s furious tunnel bust-up with Diego Costa was a product of his desire to protect and support his team.

According to the Liverpool boss Brendan Rodgers, who believes his current vice-captain is developing not only into a real leader at the Anfield club, but also a shining light in the way he is ready to stand up and be counted. 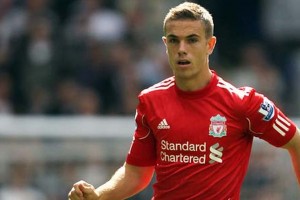 “He is developing such leadership qualities, on the field and off it he will protect his team and his colleagues. You saw the other night he is very much a team player,” said Rodgers

“He feels it is the representation of an iconic club that over the years has had many great captains and vice-captains.” he added.

Meanwhile, the Reds are preparing to step up their interest in Jay Rodriguez. The £20million-rated Southampton striker Rodriguez is hoping to get the all-clear next week to resume playing after over nine months out with a serious knee injury.

Rodriguez has been out since April, after suffering an anterior cruciate ligament injury that ruled him out of the Three Lions’ World Cup squad.

But the 24 years-old remains a key target for top-flight trio after his brilliant form and 17 goals last season before he got crocked.