The Rijeka forward is on his way to England to finalise a move to Leicester, despite interest from Premier League leaders Chelsea.

According to media reports in Rijeka, the 23-year-old has agreed a move to the Foxes, costing the Premier League strugglers an initial £7m with future bonuses of £2.5m.

The Croatian hitman had been skeptical about joining Nigel Pearson’s side due to their position at the foot of the table, but has seemingly been assured he will be sold should the club lose their top-flight status in the summer.

Leicester are understood to have offered Kramaric; who has bagged 28 goals in 30 outings this season, a weekly wage of £28,000 which runs out in 2019. 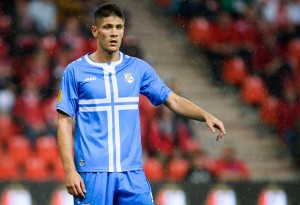 “Andrej Kramaric has travelled to London with his father and agent Joza Kramaric along with Rijeka’s Managing Director Ivan Mance, where he will have the last round of negotiations with Leicester City.” said Kramaric.

“If nothing changes until tonight or early tomorrow, Kramaric should sign a five-year contract with a transfer fee of £9.5 million to be paid to Rijeka.

Gaffer Nigel Pearson is desperate to sign a new striker this month after watching his Foxes side slump to the bottom of the table in this season’s Premier League.