Daniele Rugani has been linked with a transfer to Arsenal. Rugani is currently co-owned by Empoli and Juventus, and has turned out for the former since making his debut in 2013.

The 20-year-old defender has since made 62 appearances for the Serie A club, and his impressive performances for the Azzurri have seen the young centre-back linked with a transfer to Arsenal. 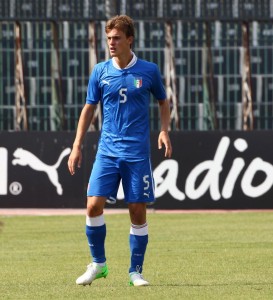 According to the reports, the Gunners interest in the youngster, and it would be a wise investment, with Rugani considered to be one of the brightest defensive prospects in Italian football. There is no indication that the North London club have made an official approach for him, or how much they would need to pay to secure his services, but there is a definite interest from the Emirates Stadium.

However, the Italian International co-ownership situation makes life very hard for the Gunners, especially now that theBianconeri have shown an interest in signing the full ownership rights of the youngster from their Serie A rivals Empoli.

Juventus  have the option to purchase all the rights for a €3 million fee, as per the original agreement, and are keen for Rugani to become the long-term replacement for the ageing Andrea Barzagli.