The Reds will assess Steven Gerrard and Mario Balotelli ahead of their Capital One Cup semi-final, first leg clash with Chelsea to determine whether they can figure at Anfield. 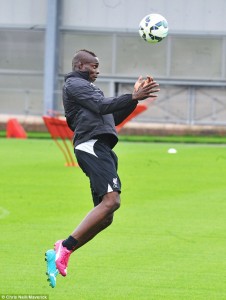 The pair missed Saturday’s 2-0 win at Aston Villa, with Gerrard recovering from a hamstring injury and Balotelli suffering from illness.

“Steven, we’ll see how he is [on Tuesday]. Hopefully he should be ok.” said Rodgers. “Mario had a chest infection last week and wasn’t available at the weekend against Aston Villa. He’s come in [on Monday morning] not feeling great, not feeling well, so we’ll check his availability.” He added.

In the meantime, Rodgers has dismissed any suggestion that Chelsea may be distracted by their Premier League form ahead of the two-legged semi-final tie.

Jose Mourinho’s side opened up a five-point lead at the summit with a resounding 5-0 win at Swansea City at the weekend, but the gaffer believes they will travel to Anfield aiming to take a step towards the season’s first piece of silverware.

For Liverpool, going all the way in the Capital One Cup would represent the first trophy of Rodgers’ Anfield tenure – something he feels will be crucial to his side’s long-term development.