Home » Football » Leeds vs Leicester: Oppose cards and back corners in even encounter

Leeds vs Leicester: Oppose cards and back corners in even encounter

Leeds United host Leicester City on Monday in the Premier League in a 8pm kick-off at Elland Road.

Both sides have made very good starts to their seasons, with a win here taking either side into the top four positions at the end of the weekend, so there is certainly plenty to play for in front of the Sky cameras.

Leeds should have skipper Liam Cooper available once more, which could mean Stuart Dallas moving into midfield, where Kalvin Phillips remains absent through injury.

Leicester, meanwhile, could be without Timothy Castagne and Jonny Evans with hamstring and back issues respectively, so look a little light at the back.

One man who will certainly be looking to take advantage of that is Patrick Bamford. His magnificent hat-trick at Villa Park took him to six league goals in six matches, which puts him level with Jamie Vardy in the top goalscorer chart. Bamford is 8/5 (Sky Bet) to score anytime, with Vardy 21/20 (Betway). Both to score is boosted to 6/1 with Sky Bet and Betfair.

Interestingly, Bamford has had at least one shot on target in all six matches, with Vardy testing the opposition goalkeeper two or more times in three of his five appearances. Betfair have boosted both strikers to have one or more shots on target each to evens, which looks a fair price. 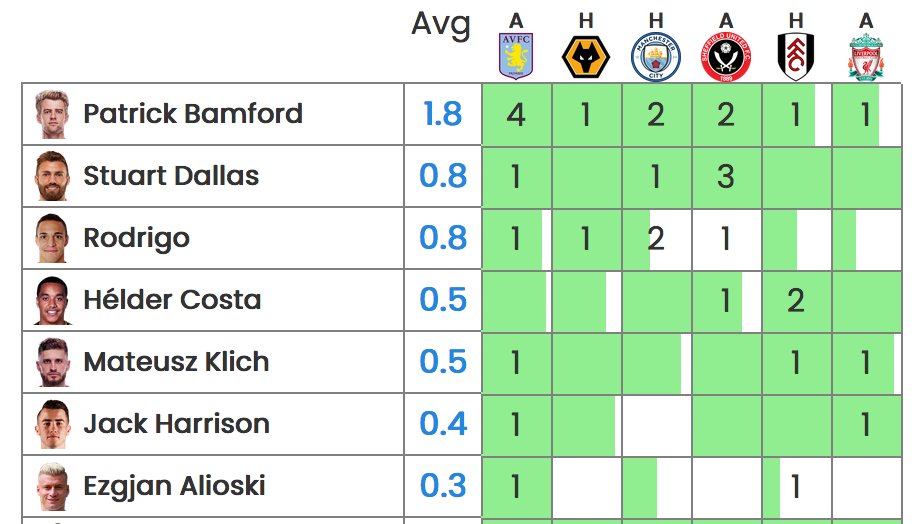 In terms of other player prop bets, Leeds tackles are always worth keeping an eye on with them utilising an unorthodox man-marking system in open play under Marcelo Bielsa. Should Cooper be fit to start, Luke Ayling would likely move back to his preferred right-back position, from which he has made 4+ tackles in five of his six matches this season. He’d likely be up against Harvey Barnes in that position, with the young English winger attempting twice as many dribbles as any other Leicester player this season. Sky Bet pay 5/4 on Ayling making 3+ tackles and 3/1 on him making 4+ tackles, which I’ll be getting stuck into providing the team news indicates him returning to right-back. 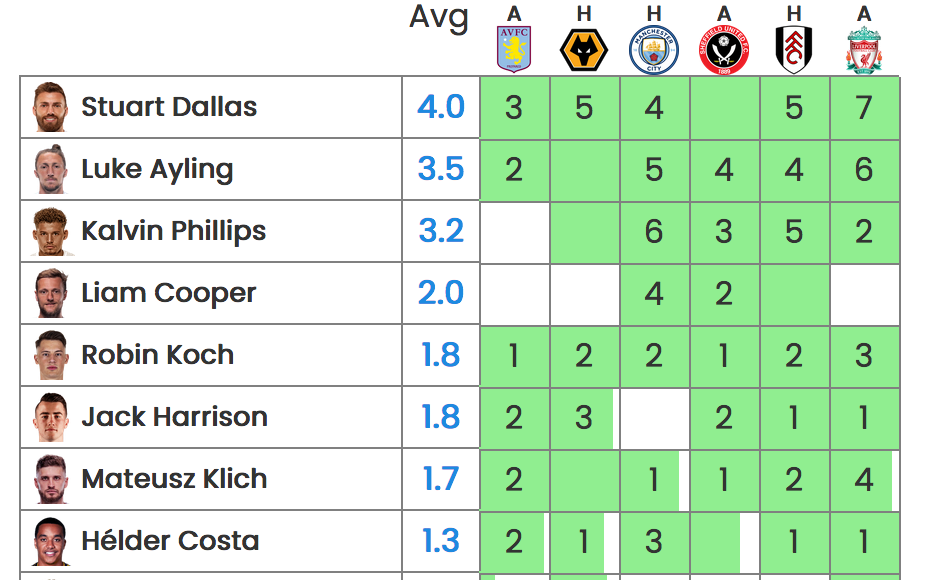 The 49-year-old is averaging 2.39 yellow cards per game in his last 18 Premier League matches (1.9 per game if you restrict the sample size to his 10 matches behind closed doors), with only one of those seeing five or more cards brandished (which was the last day of last season when Tottenham were fighting tooth and nail for a Europa League qualification spot), and only another three seeing four or more cards shown.

Equally, he has shown at least one card in all 18 of those matches, so with Leicester receiving more cards than any other side so far this season, I’m going to play safe and begin with Under 5 Cards and Over 0 Cards.

I’m keen to add corners to the bet here, too, with Leeds playing with plenty of width and putting lots of crosses in the box under Bielsa. Leeds have failed to record five or more corners on only one occasion this season (on the opening day at Anfield), with Leicester failing to reach three or more just once (surprisingly at home against Villa in what was a dour match by all accounts), so I’ll add Over 4 Corners for Leeds and Over 2 Corners for Leicester to the bet to give us total odds of 23/20.

For those feeling braver, you could throw in goals, change the corners to in each half for each side, and lower the card line by one, but I’m happy with an odds against bet in an unpredictable match.