Everton star Ross Barkley is one of the most coveted young players in Europe right now, especially amongst former Liverpool players, who frequently heap praise on the 21-year old attacker.

Reds boss Brendan Rodgers is reportedly an admirer of Barkley, and Arsenal legend Martin Keown insists that he would be an excellent signing for Liverpool.

In April, Liverpool were linked with an improbable £38m summer move for Barkley and in his weekend column  Maftin Keown wrote:

“Ross Barkley is the perfect replacement for Steven Gerrard. He is still a long way from becoming the complete player Gerrard is, but he has all the potential to be the leading player of his generation”.

The one thing’s for sure, a whole host of ex-Liverpool players want Barkley at Anfield. After watching his performance against Ecuador in June, Dietmar Hamann raved: “[Ross] Barkley is special. He reminds me of Michael Ballack” 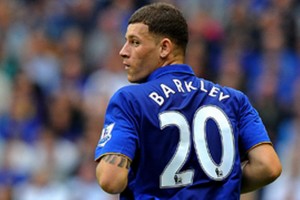 “He Barkley is magnificent. We’ve not had a player in this country since Gazza who can run the length of the pitch with the ball without ever looking under pressure. It’s as if the ball is glued to his foot”.