The Reds midfielder, Jordan Henderson has outlined his determination to return to Wembley, the scene of one of his greatest moments in a red shirt, ahead of tonight’s FA Cup against AFC Wimbledon.

Liverpool’s squad have made the journey to south for their third round encounter against Neal Ardley’s League Two outfit at Kingsmeadow, where Henderson is anticipating a thorough assessment of his side’s cup credentials.

The midfielder has been to Wembley with the Reds on three occasions, each of which arrived during his first season at the club, as boss Kenny Dalglish steered the team to the final of both domestic cup competitions in 2012. 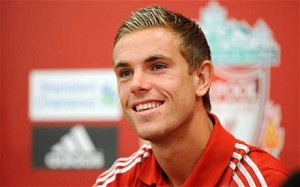 There was more joy to follow that year in the FA Cup semi-finals as Everton were beaten in the capital. However, Chelsea ended any hopes of a cup double in May when they inflicted a sobering 2-1 defeat in the final.

“In my first year here, we won the Carling Cup, which was brilliant. Then we got to the final of the FA Cup by beating Everton at Wembley but we lost to Chelsea, which was hard to take.” said Henderson.