According to media reports, the Reds have agreed a £4.7 million deal with Lille to bring Belgian starlet Divock Origi to Anfield this month, rather than in the summer.

Liverpool signed the young forward last summer, but immediately loaned him back to the French club for the coming season and now want to bring him to the Premier League ahead of schedule.

After the reports of his move, Origi has left out of Lille squad amid talks of his loan recall. Both clubs have agreed a £4.7 million fee to cut the player’s loan short and see him come to Merseyside this month.

The transfer also shows that Liverpool gaffer Brendan Rodgers is desperate to bolster his strike force, as trio Mario Balotelli, Fabio Borini and Rickie Lambert struggling to fill in for the injured Daniel Sturridge. 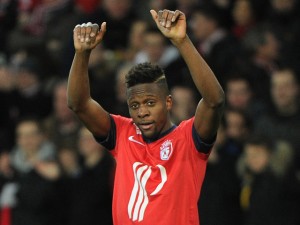 The Liverpool have problems up front throughout this season and only one man who’s carrying the weight of the side is Raheem Sterling.

Now, the Northern Irishman is prepared to shall out a further £4.7 million, on top of the £10 million paid last summer.

The 19-year-old would likely be open to the move, having been booed by Lille fans recently due to his lack of goals, as he last scored back in October.