The Reds agreed terms with Xherdan Shaqiri over a potential switch to Anfield and now just need to strike a deal with Bayern Munich, according to media reports.

Shaqiri’s time in Germany hasn’t gone according to plan as he’s failed to establish himself as a first team regular.

The 23-year-old was strongly linked with a move to Liverpool during the summer transfer window. Later in the end, he was forced to stay at the Allianz Arena as Liverpool were unable to agree a fee with Bayern.

After that, the Swiss international has continued to find first team action hard to come by,as making just 9 league appearances so far this campaign, with many of those coming from the bench. 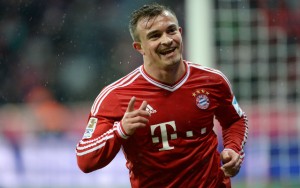 It’s now down to Liverpool to strike a deal with Bayern. However, that may be more difficult as media reports in Swizerland suggests that the Reds are struggling to go above £10 million and face stiff competition from Juventus and Inter Milan, as both keen on luring him to Italy.

As, he already proved his quality at the World Cup with his country and was excellent for FC Basel before moving to Germany. So he would be an excellent addition for £10 million if Liverpool were able to win the race for his signature.