The Reds Chief Executive Ian Ayre admits the club are still unsure about the naming rights of the new stand at Anfield, but insists the deal will benefit the club hugely with it acting as a great source of income.

Furthermore, the Chief Executive confirmed that the Reds’ commercial department is in talks with people over the idea.

Liverpool announced two months ago that they would be renovating Anfield and instead of moving away from the ground, with perhaps a sharing system with rivals Everton, they would be building a new stand at their existing ground to keep the club’s heritage, tradition and culture.

According to reports, the new Anfield stand, with an extra 4,000 seats and another 4,500 hospitality places to add, will generate additional revenue of around £20 million a year for the Reds which will significantly help the club in future transfer windows. 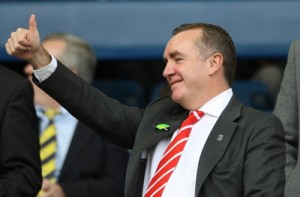 Fenway Sports Group, owners of the club, have come some way from taking them from near administration in 2010, to a future with great potential and a clear vision, despite there still being some debt at the club.

Construction work on the Main Stand was started in December by workers on Mersesyside, with further expansion in the Anfield Road expected after its completion, bringing capacity close to 59,000 at Anfield.