According to the reports on Monday, Manchester City midfielder James Milner is seemingly edging nearer to a Liverpool move at the end of the season.

Liverpool  are growing increasingly optimistic about bringing the 29-year-old to Anfield in the summer. 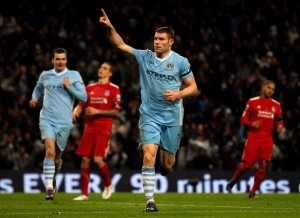 The Englishman’s contract talks at the Etihad have reportedly stalled, and a lack of first-team football appears to be the stumbling block in him signing a new deal with the Premier League champions.

Milner has been linked with a move to Merseyside for a while now, with Brendan Rodgers clearly a fan of what he could bring to his side.

The former Leeds United youngster would bring versatility, quality and a superb work-ethic to Liverpool’s squad, and although not always a headline-maker, he is a player appreciated greatly by his teammates.

After  impressive five assists, according to who scored, which is the same as Raheem Sterling despite starting nine games less. He has also set up three more goals than both Philippe Coutinho and Adam Lallana, having begun five and two matches fewer, respectively.

Liverpool gaffer has been criticised in the past for signing too many young, inexperienced players, and bringing in Milner would be a refreshing change in that respect.

Having an experienced and proven Premier League player, with title winning pedigree, who is still hungry to win trophies and prove himself in a regular role, especially on a free transfer, would be good business for Liverpool.