Liverpool are monitoring Australia goalkeeper Mathew Ryan as they look to bolster competition for struggling number one Simon Mignolet, according to reports.

The 22-year-old has been in great form at the Asian Cup, pulling off some eye-catching saves and conceding just one goal in his side’s opening two Group A wins.

Ryan, who plays in Belgium with Club Brugge, has now caught the eye of Liverpool boss Brendon Rodgers, according to reports in a number of British newspapers.

“I think he will move to a bigger team, possibly for next season,” he told the paper. 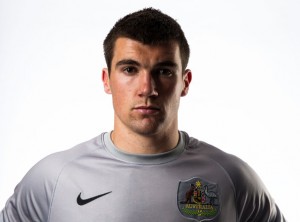 All the media reports in English media shows that stories that Rodgers was eyeing a possible move for Ryan in the summer.

Liverpool’s Mignolet was dropped earlier this season and then later recalled when replacement Brad Jones picked up an injury.

An English move for Ryan would follow in the footsteps of his Socceroos predecessor Mark Schwarzer, who enjoyed distinguished spells at Middlesbrough and Fulham and a stint at Chelsea.

Australia are through to the Asian Cup quarter-finals with a game to spare after beating Kuwait 4-1 and Oman 4-0.