The Reds boss, Brendan Rodgers has confirmed that there have been discussions with Lille over the early arrival of striker Divock Origi, but nothing has been set in concrete at the moment.

Origi signed for Liverpool over the summer for a fee of roughly £10 million following a great World Cup with Belgium, but he was immediately sent back to Lille for a season to gain more experience as part of the deal between the Reds and the French outfit.

After a strong start to the campaign, Origi has struggle in recent weeks with Lille in France and it took a turn for the worse recently when the youngster was booed by his own.fans. 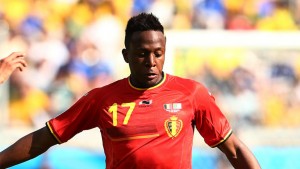 Rickie Lambert, Mario Balotelli and Fabio Borini have struggled between them to fire away the goals for Liverpool, and Rodgers is now keen to spend more cash to bring Origi back and solve his club’s poor strike force.

Daniel Sturridge is on the verge of a return, but Rodgers knows if the England international picks up another injury, the club could be in severe trouble with the rest of the strikers department causing issues for the team.

Rodgers has confirmed there have been discussions between the clubs, but nothing is for sure just yet.