According to reports, the new Eagles boss Alan Pardew has made an inquiry for the Spanish defender and is keen to offer him regular football at Selhurst Park.

Crystal Palace are in need of a left-back, with former Liverpool defender Martin Kelly having arrived in the summer meaning regular right-back Julian Ward has deputised in the role.

With Jon Flanagan nearing a return to fitness, Brendan Rodgers may be tempted to allow Enrique, one of the club’s high earners given his role as a backup player to leave on loan.

“If everyone stays there might be a few who need to go out on loan because they are not playing so much. Enrique would certainly fit into that category.” said Rodgers while speaking to media last week. 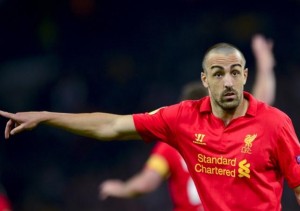 The Spaniard, 28, missed most of last season due to a knee injury and has made just five starts this campaign. The recent change to 3-4-2-1 shape has seen his opportunities limited further, with Alberto Moreno and Lazar Markovic rotating between the left wing-back or midfield position.

Earlier in the week, Pardew admitted he had attempted to sign another Liverpool player, forward Rickie Lambert. He said that we had a conversation on Lambert but Pardew don’t think Rickie is going anywhere, as he wants to stay there and try and win his position.