The road to one of the three remaining opportunities at silverware gets underway today for Steven Gerrard and Liverpool when they will face AFC Wimbledon in FA Cup today.

While thereis going to be plenty of talk about the captain signing off with a trophy, it doesn’t look as though he’ll be involved from the outset.

Rodgers is expected to stick with Simon Mignolet as Brad Jones is still out with a thigh injury.

Dejan Lovren could be set for a comeback with Rodgers likely to make changes to his defence. Martin Skrtel is also expected to come back in having been suspended for Thursday’s 2-2 draw with Leicester City with Kolo Toure given a breather. 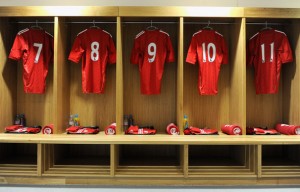 As, Steven Gerrard is likely to be rested which could see Emre Can move into midfield alongside Lucas Leiva. Jordan Henderson is another who could get a breather so Javier Manquillo may come in on the right with Alberto Moreno keeping his place on the left.

Finally, Mario Balotelli is in contention and could start up front with Raheem Sterling given a well earned rest . Although Rodgers may opt to go with Rickie Lambert ahead of the out of form Italian.

Both Philippe Coutinho and Adam Lallana should both be rested which could open the door for Fabio Borini and Lazar Markovic to start in attack.