Liverpool was linked with the hotshot forward before this month’s transfer window, but talk has died down in recent weeks. 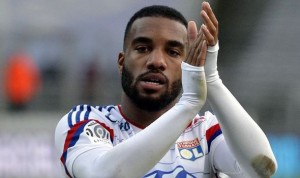 On the other hand, according to French media, Brendan Rodgers is now ready to table an offer for the in-form 23-year-old, who has hit an impressive 23 goals in as many games for Lyon this term.

The French giants Paris Saint-Germain are also said to be keeping a close eye on Lacazette’s situation and could be ready to rival Liverpool should they move for the striker.

It is unclear how much the Reds would need to spend to add the youngster to their squad this month, with any interest from PSG likely to drive the price skywards.

However, Rodgers is thought to be determined to add to his strike force before the transfer window closes, with summer signing Mario Balotelli yet to score a Premier League goal for the Reds, while Daniel Sturridge continues his recovery from several injury setbacks.

Alexandre Lacazette is performing exceptional this season as he is leading the French league table with leading goal scorer.