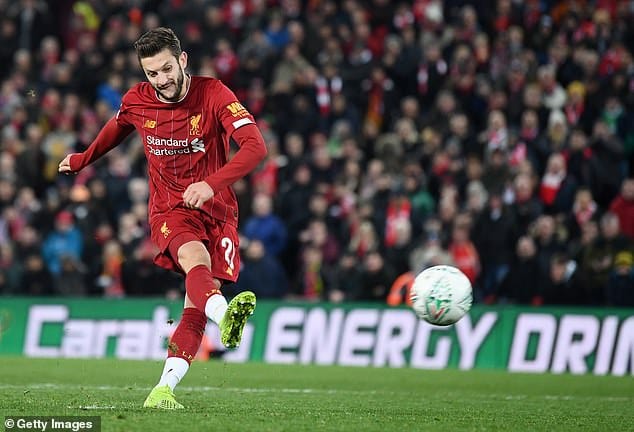 Liverpool midfielder Adam Lallana has sensationally been linked with a move to Ligue 1 champions Paris St-Germain next summer.

The 31-year-old, who is out of contract next June and therefore free to discuss a potential move with foreign clubs from January, has only started one league game this campaign.

The England international is reportedly earning around £7 million per year, and the Reds may feel they can use those wages on more pressing areas in the squad, such as a winger like Ryan Fraser or Jadon Sancho.

However, any move away from Anfield would likely weigh heavily on manager Jurgen Klopp, who was full of praise for Lallana after his recent equaliser as a second-half substitute against rivals Manchester United:

“This weekend we had a long talk in general about our situation, and he is completely relaxed and fine and knows how difficult it is at the moment to come into the team.

“But he just trains well and he deserved that; it was 25-30 minutes and he had a proper impact. Then scoring a goal – wow! That was really, really nice.”

PSG, meanwhile, are reportedly set to lose forward Edinson Cavani to LA Galaxy, with Lallana touted as a replacement for the Uruguayan.

It seems an odd one on the face of it: Cavani has 397 career goals to his name, whereas Lallana has only 85. They are clearly different players with different strengths.

But it may be that the Parisians have already signed Cavani’s direct replacement in Mauro Icardi, who joined the club on a year’s loan from Inter Milan in August with an option to buy next summer.

Neymar and Kylian Mbappe, too, provide the side with further options to play as a central striker, especially with Angel Di Maria currently performing brilliantly on the left wing.

PSG have already shown a willingness to dip into the English market in recent times, having signed midfielders Idrissa Gueye from Everton and Ander Herrera from Manchester United in the summer.

A move for Lallana, then, may not be as surprising as it seems on the surface after all.