According to media reports, Liverpool midfielder Suso has reached an agreement to join Italian side AC Milan on a four year contract, the player’s agent has also confirmed that his client is set to leave Anfield.

“Yes, I can confirm that there is an agreement between Milan and Suso on a four-year contract There’s a possibility that he will arrive in January. We willl just have to see what happens between now and the end of the transfer window”said Suso’s agent Jaime Serra.

The midfielder however hasnot been given the chance to shine and manager Brendan Rodgers inexplicably has refused to play him.

The 21 year-old, who joined the club’s famed youth academy in 2010 has just played one game this season and had scored in his only appearance. 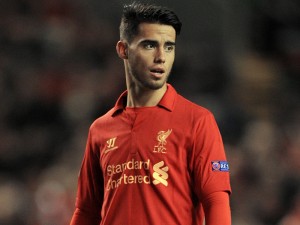 As, the midfielder’s contract is set to expire in the summer and there were no talks of a possible extension. Earlier, the media had reported that AC Milan have reached an agreement with his agent and a four year contract is mooted.

While the Rossoneri are getting yet another player on a free, Liverpool should be kicking themselves for not being farsighted.