The Reds has offered Fabio Borini to Lazio in exchange for Nigeria international Ogenyi Onazi during transfer window in January.

According to reports in Italian and English media, the Nigerian Onazi is a January transfer target for the Anfield giants and they have made a bold step to get him with a swap deal plus £8 million.

Liverpool are desperate for more strength in the midfield and their boss Brendan Rodgers has identified Onazi as the man to help the Reds do well in the Premier League. 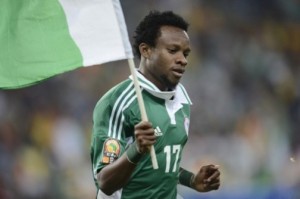 The midfielder who featured for Nigeria at the 2014 World Cup in Brazil, is a key man for the Serie A club, but Liverpool is looking to take advantage of Lazio’s long-term interest in Borini by offering the former Chelsea and Roma forward plus £8 million for Onazi’s services.

Italian Fabio Borini has failed to impress this season alongside Liverpool’s other misfiring strikers, and Rodgers is ready to part ways with the Italian as he looks to engineer an early return for Lille loanee Divock Origi.

Remember, the Nigerian star Onazi, who has also been linked to move to Premier League sides of Everton, alongside Liverpool, had recently extended his contract at Lazio.