The Reds are believed to be weighing up a £15million bid for Aston Villa’s power house Christian Benteke. The club is already in the market in search of a potent goal poacher and Benteke could rightly fit in into the bill at Anfield.

Liverpool has seen all their strikers struggle for form this season and that has really derailed the club’s target. Summer acquisition from AC Milan Mario Balotelli has not justified the £16million price tag Liverpool paid to bring him to Merseyside.

Christian Benteke would be a good acquisition and at just the quoted £15million, will be a good bargain for the club. The fact that he is on a mere £60,000 per week will also be a plus for Liverpool. 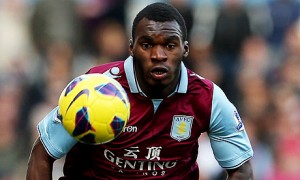 Benteke has a good Premier league experience, and already a proven striker in the league. He has scored 31 league goals in 68 appearances for Aston Villa since joining the club in 2012 and will likely improve that ratio with better players at Liverpool around him.

The only problem Rodgers will however face a stiff fight from Villa boss Paul Lambert whose team is already struggling in the league and will want to keep their best players to help them escape the drop.