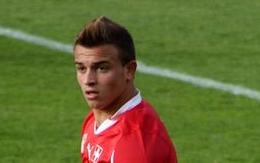 After months of transfer speculation, the race to sign Basel winger Xherdan Shaqiri may finally come to an end when Liverpool begin the formal bidding for the youngster.

The Swiss international has drawn widespread attention from some of Europe’s elite sides following some dazzling displays on a club and international level.

One of the winger’s latest exploits was defeating Manchester United in the Champions League as he provided both assists in a match that ended 2-1 to FC Basel.

Despite only graduating from Basel’s academy in 2007, the 20 year-old has also made 17 appearances for the Swiss national side, scoring four goals in the process.

Liverpool have been linked with numerous wingers in recent months with Lukas Podolski and Adam Johnson both popping up on a regular basis.

The rumours could prove true as the Anfield club seeks to revive their season, which would see them finishing outside the top four again should they continue their current course.

The Merseysiders spent heavily on their midfield over the summer window, bringing in the likes of Charlie Adam, Jordan Henderson and Stewart Downing.

Despite the fact that the trio cost around £50m, Kenny Dalglish may still dip into the transfer market once more in an effort to improve his squad.

The move may rest on who leaves the Reds side first though with Dirk Kuyt and Maxi Rodriguez both being linked with moves away from the club.