Liverpool have made an extraordinary attempt to land Arsenal wonder kid Akpom.

Chuba Akpom is regarded as one of the most exciting young talents at Arsenal but is stalling over signing a new contract Now with Akpom only playing four times this season, the Metro reports he is keeping his options open amid speculation of interest from across Europe. 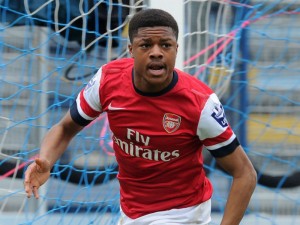 The Premier League champions Manchester City are also keen, as are German giants Borussia Dortmund and Dutch club FC Twente, who have already made pre-contract offers.

The 19-year-old is eligible at international level for England and Nigeria, has proven to be a regular scorer at youth level for Arsenal.

Though arsenal gaffer  Arsene Wenger opted for Yaya Sanogo ahead of him on various occasions during the first half of the campaign, which frustrated large numbers of Arsenal fans. Now Olivier Giroud back to full fitness and Danny Welbeck nearing a return, it appears unlikely Akpom’s fortunes will change in North London.

Brendon Rodgers’ side is struggling throughout this season as their summer transfer players Mario Ballotelli fail to perform. The Reds also faced absence of their star player Daniel Sturridge, who was out of the game for almost first half of the season.