According to media reports, Liverpool have reportedly made an opening offer of January’s transfer window for a long-term target Xherdan Shaqiri.

The 23 year old has struggled to retain a foothold in the Allianz Arena starting eleven under Pep Guardiola, and looks likely to leave the German giants with the former FC Basel man said to be available for a very reasonable £12m.

On other side, the Turkishgiants, Juventus are also reported to be keen on bringing in wide-man on a loan deal from the German club.

Bayern Munich may prefer an outright sale with the former Barcelona’s gaffer,Pep Guradiola seemingly more than able to cope without the attacker who has made just three Bundesliga starts this season. 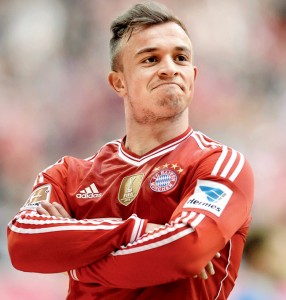 The Reds boss, Brendan Rodgers may be looking to strengthen his attack and given that Raheem Sterling is being converted from a winger into a striker there is perhaps a scope for the addition of Shaqiri.

Xherdan Shaqiri was rated as one of the hottest prospects in European football but right now he is in danger of stagnating at Bayern Munich.

He had a great time back at World Cup 2014 in Brazil, where the Swiss international netted a hat-trick against Honduras.