According to reports, The Gunners are set to mount an audacious bid for Arsenal starlet Chuba Akpom who is keen on getting more game time

Chuba Akpom is seriously considering pre contract offers from the likes of Borussia Dortmund, Feyenoord and FC Twente as he ponders whether he should accept Arsene Wenger’s offer of a new three year deal. 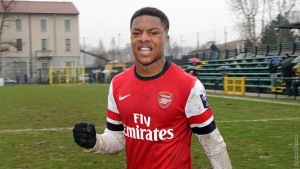 The youngster played during his team’s 3-2 FA Cup win over Brighton and Hove Albion but believes that he must consider moves to other places as he understands that staying with the Gunners might see him end up craving for game time.

The player’s deal has only six months left which means that he might even leave easily. Also, the youngster is allowed to talk to other clubs and could see himself leaving a club where he first arrived as a six year old.

Moreover, the player knows that at his age, it would be really very hard for him to displace the likes of Olivier Giroud, Danny Welbeck or Alexis Sanchez.

Keeping all these things in mind, Liverpool are set to approach the youngster with an offer that might tempt him into joining a rival club this January or in the summer.