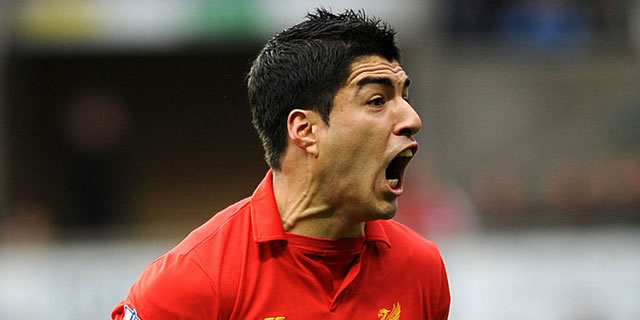 Its Liverpool v Cardiff with the game available as part of a 5/1 treble from Paddy Power, the Dublin firm announced today (KO 12.45GMT).

The popular Irish based brand have confirmed it is ‘enhancing’ the price of the treble on the Liverpool, Manchester Utd and Man City wins today – previously 5/4, the price is now enhanced 5/1.

Its sure to attract plenty of attention from punters as all three sides have very winnable games, as Liverpool face Cardiff, Manchester United take on Old Trafford, while Man City take on Premiership strugglers Fulham at Craven Cottage.

It says a lot about the Premier League that Brendan Rodgers could be giving his send handshake this week to a soon to be sacked manager after the final whistle of Liverpool and Cardiff in Anfield on Saturday.

Rodgers bid farewell to Andre Villas-Boas on Sunday by sealing the end of his Tottenham career with a 5-0 win and the Northern Ireland man could well do the same to Malky Mackay tomorrow as Cardiff’s eccentric owner Vincent Tan has all but ended his manager’s term with a ‘resign or be sacked’ email this week.

For his part Rodgers says he is astonished by the situation and is glad he escaped a ‘close shave’ with the Spurs hierarchy when they approached him to take over from Harry Redknapp before the start of last season.

“I find it astonishing, what he’s had to go through. To see him being questioned on what he has done, I find it remarkable.

“He’s going to go on and become a big manager at a top club and I find it astonishing there’s talk about him leaving there, absolutely astonishing.

“My only conclusion when I look from the outside is you’ve got a business guy operating the club who obviously knows nothing about football.”

With 17 points from 16 games so far in their promotion season Mackay should be looking forward to pitting himself against the man he worked with at Watford in 2008 and one of Europe’s in form sides with the comfort of a four point cushion between Cardiff and the relegation zone.

Last week’s win over West Bromwich Albion should have made this a trip to savour but instead he will be once again be the centre of attention due to the club’s owner’s actions.

It was never likely to be an enjoyable ride for the Scottish manager though as Luis Suarez’s recent form has made him a scourge for opponents and with the Uruguayan only three goals from the 20 mark this season, despite missing the first five games of the year.

The striker could even breach twenty goals before Christmas having scored the only two hat tricks of the season so far.

Suarez is likely to captain the side again as Steven Gerrard remains sidelined along with Daniel Sturridge and Luis Enrique.

Cardiff meanwhile will be waiting on a late fitness test to determine whether former Liverpool striker Craig Bellamy will be able to play in any part.