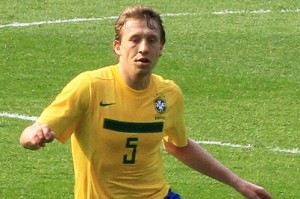 When Liverpool and Rafael Benitez purchased Lucas Leiva from Brazilian club Gremio in the summer of 2007 the expectations were quite big. Firstly he was Brazilian, which automatically makes players born with huge expectation anyway but secondly he was bought for six million pound and was a young attacking style player developing a big reputation in his homeland. Inter and AC Milan were among the leading contenders for his signature before Liverpool pulled of at the time what was thought to be a real transfer coup.

Reds Fans awaited this young Brazilian talent to make his club debut, soaking up numerous you tube videos of their new future samba star player taking on numerous players before finishing astutely on a consistent basis. However when he finally did make an appearance the fans were left scratching their head as he repeatedly turned away from the oppositions goal, got pushed off possession and passed back to his defenders regularly through a game.

‘He is only young give him a chance!’ fans argued to each other. Soon after twenty or thirty appearances had been made it dawned on Liverpool fans that this guy was no Brazilian samba star ready to dance and smile his way into the kopites hearts but actually a weak, defensive player who had no chance of fulfilling his promise, reputation and relatively big price tag for his age.

After his first season Lucas had some fans remaining on his side who argued that with Alonso, Mascherano and Gerrard in front of him he needed time to develop his game and settle into the English culture, language and football style. Although the majority still cried there was not enough ability shown even in glimpses to put any faith at all behind this shy young man.

He began his second season with not much improvement, scared to go forward with the ball and provide an attacking threat. Again being pushed from the ball easily and giving away possession cheaply. Rafa Benitez stuck by his man and Lucas scored a goal or two in cup competitions to show he had at least some finishing ability in his game. Then against Newcastle during Liverpool’s five to one away win at St James Park (now the infamous Sportsdirect.com arena) he had his best game to date, running the midfield and providing Gerrard with an assist.

The Liverpool players were obviously behind Lucas and after seeing him in training on a day to day basis they knew he had talent as they all ran to Lucas pointing at him with even Gerrard congratulating Lucas. It was a false dawn as Lucas again struggled to put any sort of form together only having a good game every few weeks. He also gave away a late penalty to ensure Wigan grabbed a point at Anfield and the fans had seen enough. Strangely a small pocket began to sometimes boo Lucas when he came on as a substitute in games. This must have been awful and mentally he must have felt like giving his Liverpool career up and moving somewhere with far less expectation.

As dark times fell on the club and Alonso and Mascherano departed for Spains La Liga giants he began under Hodgson finding himself a regular in the starting eleven. More physical and with a positive attitude Lucas started to star in Liverpools wins over Manchester United and Chelsea amongst others and was rewarded with the fans player of the season award, unthinkable just a few months before!

Lucas had got it! build up some muscle to cope with premier leagues bustling midfielders and face the oppositions goal to use your passes wisely, he had obviously learned from the other midfield greats who had now left.

Starting the 2011-2012 season brimming with confidence he performed constantly at a high level to possibly become the managers and surprisingly the fans first name on the team sheet, unthinkable!

The proof was there for all to see with opta index stats proving the reds were not seeing things as he was the second highest performing midfielder behind last years league star Scott Parker.
Every fan who now has massive doubts about young players not being good enough instantly will surely be hit with the Lucas story in debates and told to await judgement.

Who would bet against Lucas becoming a future captain for club or country! I certainly wouldnt.