Luis Suarez – The Perfect No. 7 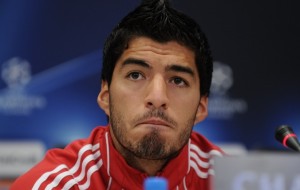 Suarez continues to be the must have name on the back of the replica shirt as he continued his fine scoring form in the 2-1 Carling Cup win against Stoke on Wednesday night. His 2 goals carried Liverpool into the quarterfinals of the competition after being 1-0 down at half time.

Liverpool had the majority of the possession and chances but both Carroll and Suarez failed to convert good scoring opportunities into goals, meaning a powerful Jones header for Stoke left Liverpool trailing after 45 minutes.

After the break Liverpool continued to press and finally found their equalizer through a superb effort from Luis Suarez. Controlling the ball by the left byline he flicked it through the legs of the defender before curling the ball past Stoke keeper Thomas Sorensen from the edge of the penalty area. He followed this up just minutes from time with a headed goal from a Jordan Henderson lobbed cross. He has scored 7 times for Liverpool this season and looks in no mood to stop his run of form.

Ever since the goal on his debut, and his incredible performance against Man Utd last season, the fans have come to love the silky skills and slight casualness and arrogance in his playing style. He is a natural showman and in many ways the perfect example of the top class striker Liverpool needed to grab the back the attention of the Premier league, once again proving they are an attacking force to be reckoned with. Since his move from Ajax in January Suarez has more than lived up to his £22 million price tag, but he same cannot be said of fellow striker Andy Carroll who is finding it tough at Anfield to live up to the immense £35 million price tag put on him since his move from Newcastle in January.

He has only scored twice this season, failing again to score against Stoke, and has found it difficult to compete with Bellamy and Kuyt for the strikers role alongside Suarez. Some fans are skeptical that Carroll will ever become a force at Anfield, especially seeing that he has so far failed to gel well with any of his fellow strikers or score any individual goals.

However, it could be that he just needs more 1st team football to really bring forward his potential. Liverpool needed to stick with the striker for a few games, even if he does not initially score, to be able to get Carroll back into some consistent form. Only then will fans be able to judge if Carroll will fit in at Anfield. On paper, Suarez and Carroll should compliment each other perfectly, and one thing is for sure, if he plays as well as he did for Newcastle, there will be few fans complaining come the end of the season.