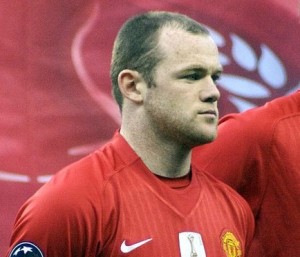 Manchester United are bracing themselves for an audacious offer of £70m for their star striker Wayne Rooney with Real Madrid ready to stump up the cash to land the England international.

Last season saw Rooney appear to be in a spot of bother both on and off the field, culminating in his suggestion that he wished to leave Old Trafford. After emergency talks with Sir Alex Ferguson – and a visit from fans to his house – the 26 year old signed a new improved deal and confirmed his committment to the club.

Real Madrid though believe a £70m bid could tempt American owners, the Glazer’s, into selling one of their prize assets who has reached the front pages just as much as the back pages over the years and although unlikely that Sir Alex Ferguson will sanction such a move – especially after allowing Ronaldo to move for £80m – the chance of a few years in Spain with Real Madrid could tempt Rooney and his wife.

At 26 years old Rooney should still have his best years ahead of him and although Sir Alex Ferguson is looking to build a team capable of going places when he eventually leaves the club it is certain that the record breaking manager will want Rooney to be part of that when the time comes.

For Real Madrid it marks yet another period where they wish to spend big to impress the fans with their spending power and the bringing in of big names. The twist? If Mourinho takes over at Old Trafford would he prefer to have Wayne Rooney already at base camp?