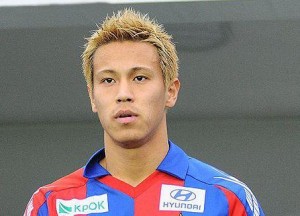 After years of transfer rumours between player and club, Manchester United are ready to employ a change in tact in their efforts to sign CSKA Moscow playmaker, Keisuke Honda.

It emerged earlier this week that Arsenal were also gathering interest in the Japanese international, and rather than lose out on the man they’ve been tracking for some years now, it seems Sir Alex Ferguson could offer Dimitar Berbatov in a swap deal to get his man.

Despite the fact that Berbatov has scored six goals in nine Premier League appearances this season, the 30 year-old is still on the chopping block at Old Trafford and is expected to be offered in part exchange.

The Red Devils would still need to pay £4m if they were to land Honda, but it’s arguable that the 25 year-old would be coming into an area of the pitch that United are in dire need of reinforcements.

Sir Alex Ferguson has been unfortunate in his squad’s injury frequency this campaign and apart from the season-long injury to Nemanja Vidic, the Scot will also be without Tom Cleverley until February due to an ankle injury.

Another midfield absence is Darren Fletcher, who is currently on leave from the game as he battles against a stomach illness that he has apparently coped with for the past four years.

Honda has made a name for himself in the Russian Premier League as one of the division’s strongest playmakers, creating endless opportunities for the strikers in front of him.

While there are bigger names being linked with Old Trafford moves, supply is one thing United are short of at the moment and Honda – who has made over 65 appearances for CSKA – is proven to provide just that.

Honda has been out of action for a large portion of this campaign so far but is just getting back to match fitness and while he would represent a January transfer risk, the Asian star could be a valuable asset if he were to revive his best form under Ferguson.