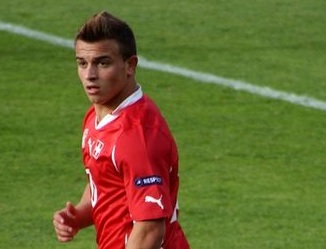 Manchester United are ready to end their New Year frustrations by launching a double bid for two players that have also been on the radar of Arsenal.

First on the United clubs wishlist is that of 25 year old Yoann Gourcuff who has been a target of Arsenal’s for at least the last 24 months. The attack minded international is subject to interest from Manchester United as they look to add some guile to their midfield having lacked creativity in that area. His value may not put the club or the Glazer family off either with a suggested value of £14m likely to let Lyon give the green light for United representatives to talk to the player.

Another player Sir Alex Ferguson is believed to be keen on is that of the man who helped knock his side out of the Champions League. The 20 year old Swiss international already has 17 caps to his name and many claim a left footed winger is just the tonic the club require as they look to retain the Premiership trophy.

Having knocked Manchester United out of the Champions League though will not help the Old Trafford club in landing the youngster in January, with the player likely to want to remain and finish the campaign with his club Basel. The winger has been admired by Arsenal since the group stages that saw United finish fourth although it is believed Wenger has had Shaqiri watched since he played as a teenage for the Basel U21 side.

It is believed a value of £10m has been slapped on Shaqiri to resist any moves in January.