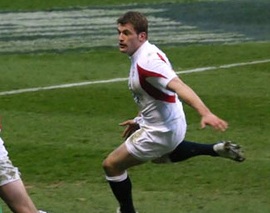 England winger Mark Cueto has brushed off the sides off-field issues during the World Cup in New Zealand claiming that all the problems have now been dealt with and it’s now time to move forward.

The 31 year old winger missed out on Saturday’s victory against Scotland with the coaching staff believing he was not quite 100% however with Armitage now banned for his high tackle the Sales Shark back is in line for a starting place.

Regarding the recent incidents, and in particular that of the night out involving Mike Tindall where he had a couple of drinks, Cueto feels it is the press trying to make news.

“We’re talking about two incidents in four or five weeks, things have happened. We have learned from them. We have had to learn from them and we have improved our discipline off the field.”

Asked if he felt England were losing their grip on standards within the game, Cueto replied:

“I don’t think standards have slipped. With the Tindall thing, we are talking about a couple of guys going out for a few beers. What is wrong with that? If the boys can’t go out and have a few beers then it is a sad world that we live in.”