Mark Schwarzer has joined Leicester City on a permanent deal, Chelsea thank him greatly for his contribution over the past 18 months and wish him well for the future.

“I am delighted we have been able to sign a player of Mark’s vast experience,” said Foxes gaffer Nigel Pearson.

He continued in goal for the rest of the campaign, including a memorable 2-0 win at Anfield. However, with Thibaut Courtois joining the squad this season, the young Belgian has shared goalkeeping duties with Cech and Schwarzer has not featured. 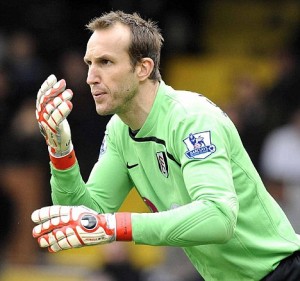 The 42-year-old departs as the oldest player to have appeared for Chelsea, having made a Champions League debut late in a career in which he has also played for Fulham, Middlesbrough and Bradford, and elsewhere in Europe at Kaiserslautern and Dynamo Dresden.

While It was at Chelsea that when he announced his retirement from international football having become Australia’s most-capped player with 109 appearances.

His departure sees Jamal Blackman return to Chelsea following his loan spell with Middlesbrough. The 21-year-old will work as the third goalkeeper with the first-team squad.