Home » Football » Arsenal » Mats Hummels speaks out on his future

Mats Hummels speaks out on his future

Mats Hummels has refused to commit his long-term future to Borussia Dortmund amid reports of a possible €60m move to Arsenal or Manchester United.

Hummel’s future at the Westfalenstadion has been thrown into doubt in recent months after Dortmund’s terrible start to the season that sees them currently sit in the bottom three of the Bundesliga table at the mid-way point of the campaign.

Understandably he’s attracting interest and Arsenal and Manchester United have been strongly linked with a move for the German international in recent weeks, with both

Arsene Wenger and Louis van Gaal making him a top target as they look to strengthen their defences this winter.

The Reports just last week suggested that United were ‘confident’ of beating the Gunners to Hummels signature and believed they could persuade Dortmund to cash-in for €60m (£47m) this month. 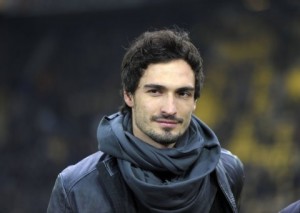 The 26-year-old has now responded to the speculation by reminding everyone that, despite receiving many offers to leave over the years, he’s chosen to remain loyal to Dortmund and is only concentrating on improving his form during the second half of the season.

However, the German international went on to hint that he may contemplate a move at some point as he failed to commit his long-term future to Dortmund, and says he wants to make ‘good decisions’ in his career.