Arsenal striker, Yaya Sanogo has undergone a medical at Crystal Palace ahead of a loan move to Selhurst Park, according to media reports.

The 21 year old was close to joining to Bordeaux  a couple of days ago after the club’s president gave Arsenal an ultimatum to accept an offer.

But despite, Sanogo wishes to join the French side, Arsene Wenger had from the beginning said that a loan move to a Premier League club was preferable to him so that he can develop in the league.

The former Auxerre striker has just one goal to his name since he joined Arsenal on a free transfer in 2013. After playing as back up striker behind Oliver Giroud for much of last season because, he was the only option close to Giroud as back up 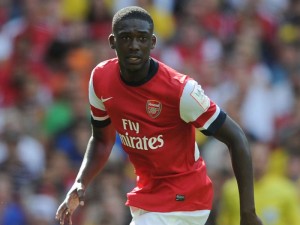 But following the signing of Alexis Sanchez and Danny Welbeck, plus the recall on loan of Joel Campbell, it has increased competition for places in the Arsenal squad which met he has had limited playing opportunities this season.

The move to Crystal Palace should afford him the opportunity to develop his game, while allowing him the chance to also work on the weaknesses in his game which includes a poor touch and his passing, this can be addressed through a combination of playing regularly and works on the training ground.