The England Under-21 striker, Benik Afobe, who is reportedly undergoing a medical at a Championship club in view of joining them on a permanent switch.

Afobe who’s been on stunning form for MK Dons this season, his goal tally way into double figures, including those two that sent United packing from the League Cup.

The Dons have had quite an impressive season in League 1 and Saturday’s comeback 2 – 2 draw and Crawley Town has lifted them to third place and within three points of second place.

He was not involved at all, even on the bench, in the draw at Crawley and Dons’ manager, Karl Robinson, subsequently confirmed that he would most likely be making a move from the Stadium MK. 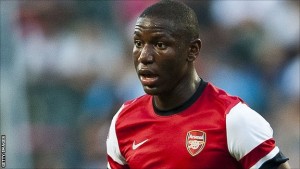 The Dons’ manager, Karl Robinson has confirmed that striker Benik Afobe is in talks with an unnamed club regarding a potential permanent move.

“We can’t say who that’s to, but he’s having a medical somewhere and he is maybe moving onto other things. We wish him good luck” said Robinson.

This would come as a shock to many Arsenal fans, as Afobe’s good performances over the past 6 months had looked enough to earn him an opportunity to prove himself at the Emirates when his loan at the MK runs out in June.