Messi follows Chelsea on Instagram as rumours swirl over future

The Barcelona ‘s star Lionel Messi has caused a minor internet earthquake by following Chelsea and some of their players on Instagram.

One of a toughest day for Barcelona,as director of football Andoni Zubizarreta being sacked and assistant Carles Puyol resigning. Now the Catalan giants will now be forced to deal with renewed speculation about their best player.

Rumours of Messi’s discontent have been swirling around on Monday after Mundo Deportivo reported he had had a falling out with coach Luis Enrique.

Messi is believed to have taken offence at Enrique giving a decision against his team training match leading to a stand-off between the two men.

The Argentina’s star was then benched for the defeat to David Moyes’ Real Sociedad on Sunday before failing to turn up for training on Monday morning. 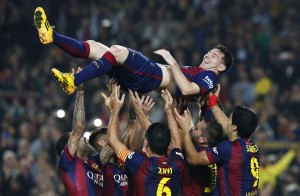 But the timing of his move to follow Chelsea, as well as defender Filipe Luis and goalkeeper Thibaut Courtois, is rather suspicious. Especially when newspapers are now openly speculating that Messi’s future is very much up for debate.

Early Doors isn’t able to corroborate the claim and establish whether the account is genuine, but either way, momentum is certainly building behind hopes that Messi may soon be coming to the Premier League.