Mesut Ozil happy with a long awaited return from injury.

The German playmaker, who has been out for three months with a knee injury that he picked up against Chelsea at Stamford Bridge, was a second-half substitute getting some valuable minutes under his belt.

Speaking to the media yesterday, the German revealed that he thinks he will be back to 100% fit by the end of the month.

“I am happy, that I could play a couple of minutes. Of course I am not at 100 percent, I only trained with the team once on Saturday, but I hope that I will be back at 100 percent end of January.”said Ozil.

The former Real Madrid player said that he is just satisfied to be back on the pitch again and that he can kick the ball with his team-mates, which he missed that so much.

He added that the match against Stoke was perfect, as Arsenal dominated and they got the three points so that makes him even happier. 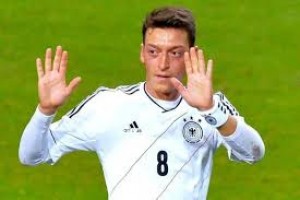 With Manchester City next up on the schedule for Arsenal it will be quite something to see Ozil join up with Alexis Sanchez and Theo Walcott for the first time and the timing couldn’t be any better.

Heading to the scene of last year’s 6-3, Arsenal will be looking to build on their comprehensive trouncing of Stoke at the weekend and will be looking to finally put an end to the yammering we all have to listen to about how they never beat the big teams.