Mesut Ozil under pressure to save Arsenal career

The Geraman star, Mesut Ozil made his much-awaited comeback last week against Stoke City, coming on as a substitute to Olivier Giroud in minute 73. He failed to make any impact on the game due to lack of time, and the game was already very much won.

More than 17 minutes, however, was enough for the public to realise some differences in terms of Ozil’s physique. Ozil appeared more muscular than during his last appearance against Chelsea, his chest looked broader, and his arms look bigger.

According to media reports, increased upper body and strength work was included in the player’s recovery plan to ensure he was ready to face the demands of the Premier League more effectively. 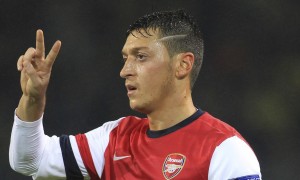 A slender frame is just one of many problems Ozil has been facing since moving to England. Another big problem for the former Real Madrid star is gaffer Arsene Wenger. The Frenchman puts a lot of hope on Ozil, but he himself fails to make the most of the German’s talent.

The arrival of Alexis Sanchez seemed to make life tougher for Ozil. The Chilean’s best position is also behind the lone striker. Like Ozil, Alexis also tends to drop deep, gets the ball and dictates play. Unlike Ozil, he did not need time to adapt to English football.