The Egyptian International is weighing up a loan move to Fiorentina after Chelsea agreed terms with the Serie A club.the former FC Basel star is not part of the Blues’ deal for Colombian ace Juan Cuadrado, who is set to move to the Premier League leaders for £26.3m.

The Blues are funding the Cuadrado transfer by shipping out German ace Andre Schurrle to Wolfsburg for £23m. Salah could be set to follow Schurrle out of Stamf 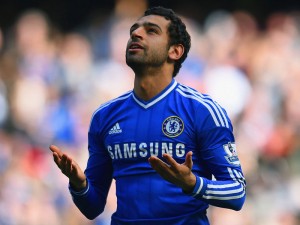 ord Bridge exit door after the west Londoners struck a deal with Fiorentina over a loan switch.

According to reports in Italy, the temporary switch will allow Salah to join La Viola until the end of the campaign without the Italian side having to pay a loan fee.

Included in the arrangement is a clause that then entitles Fiorentina to pay £750,000 to extend his loan stay for the entire 2015-16 season.

Mohmmed Salah has the same problem which his teammate Andre Schurrle is facing. The winger left FC Basel after a wonderful performance against Chelsea in the Champions League. From where the Stamford Bridge side moved him to Chelsea  in 2013. The player is expected to move for Italian club AC Roma in coming 48 hours.