The German star, Marco Reus’ Borussia Dortmund contract contains a release clause, at the bargain price of £20 million, which triggers next summer.

Mourinho should rate the German attacking threat, as there may be incentive for Chelsea to pounce sooner rather than later, as the usual suspects of Bayern Munich and Real Madrid are interested.

How Reus would improve Chelsea is hard to measure. In the deal posited by reports in media, Reus teammate, Andre Schurrle and £20 million would go to Dortmund, leaving Reus fighting with Willian for the right-sided attacking midfielder position.

What Willian lacks in offensive productivity from the right flank, he more than makes up for in graft. Reus would certainly alter Mourinho’s defensive structure. 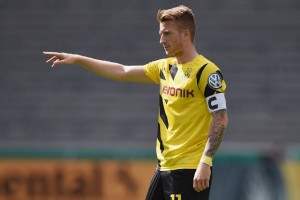 The Portuguese already on the edge of all-out attack, and he may not want to put his defence under further strain.

Another German star, Schurrle’s poor form in recent weeks, however, should give Chelsea’s gaffer something new to ponder.

Now, if German giant are willing to let their winger leave for a cut-rate price and Schurrle can regain form in a new environment than Reus to Stamford Bridge must be investigated during this transfer window, as the 25-year-old German is indisputably world-class.